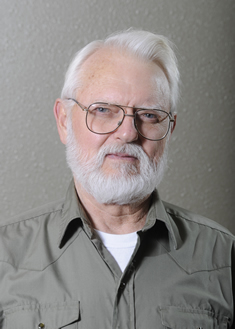 Biography
“It seems to me that I have worked with wood almost forever,” says wood turner and carver Ron Ufkes. As a young boy, he can remember cutting firewood with his father using a crosscut saw. Later, while building furniture for his own family, he used a lathe to make some table legs. “I’m sorry to say that woodturning has not revealed the meaning of life, or disclosed any of the deep philosophical insights that some have experienced while practicing their art. However, I do enjoy the sound of the tools cutting into the wood blank, and watching the ever-changing patterns in the wood as the waste is cut away, knowing that I am the first person ever to have seen it.”

While his passion and inspiration for his craft come primarily from the wood itself, he also likes his “toys.” “Like everyone else, the woodturner needs lots of ‘toys’ to make it really fun,” he said.

After high school, he joined the Army then married his wife Jan. Together they raised four children and have ten grandchildren and four great-grandchildren. After graduating from the University of Illinois, he became a National Park Ranger. He also worked for the San Bernadino County Sheriff’s Office in California for 20 years; then he retired to work for another 10 years in the defense industry. Ron and Jan moved to Arkansas in 1997, and now he can usually be found in his shop, which is a real mess, working on the lathe.

His work is on display in the Butler Center Galleries of the Central Arkansas Library System in Little Rock, as well as in the Arkansas Craft Gallery in Mountain View, Arkansas. He exhibits at the North Arkansas Woodcarver’s Show, and the Wood Turner’s annual show and sale. Ufkes was commissioned to make the awards for the Arkansas Arts Council held in February, 2015.